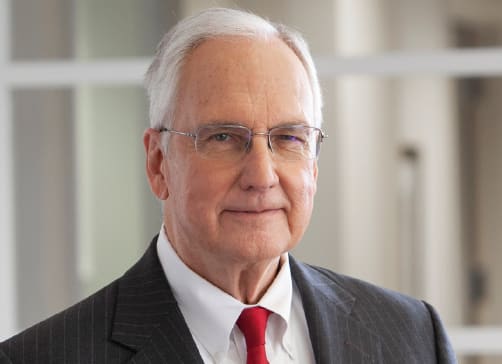 A distinguished former Republican Member of Congress from Louisiana, Robert L. Livingston is a Founding Partner of The Livingston Group.

Robert L. Livingston was elected to the United States House of Representatives in a special election in 1977 – the first Republican to represent Louisiana’s First Congressional District in 102 years.  He was re-elected to eleven successive two-year terms.

Mr. Livingston served as a Member of the House Appropriations Committee through most of his time in Congress as well as the House Select Committee on Intelligence for the maximum period of six years.  At the beginning of the 105th Congress in 1997, he chaired the bi-partisan Ethics Reform Task Force and was responsible for revamping the House Ethics Rules. From 1995 through 1998, Livingston served as the Chairman of the House Appropriations Committee where he shepherded 13 annual Appropriations Bills through the legislative process. His efforts reduced the discretionary budget each year and produced the first balanced Congressional budget in decades and the last one in modern history.  In 1998, Livingston was chosen by his peers to serve as Speaker-designate for the 106th Congress.

Prior to his almost twenty-two years in Congress, Mr. Livingston practiced law in both public and private fields for nine years.  As assistant United States Attorney from 1970-1973, he served as Deputy Chief of the Criminal Division of the U.S. Attorney’s Office where he was honored as outstanding Assistant U.S. Attorney.  He subsequently served as Chief Special Prosecutor and Chief of the Armed Robbery Division of the New Orleans Parish District Attorney’s Office (1974-1975) and Chief Prosecutor for the Organized Crime Unit of the Louisiana Attorney General’s Office (1975-1976).

Mr. Livingston earned Bachelor of Arts and Juris Doctorate degrees from Tulane University and is a graduate of the Loyola University Institute of Politics.  In 1981, he received an Honorary Doctorate from Our Lady of Holy Cross College in New Orleans, LA, and in 1990, an Honorary Order of the Coif from the Tulane Law School.  A Navy veteran, Mr. Livingston served on active duty with the United States Navy as an enlisted man from 1961-1963, and received an honorable discharge from the U.S. Navy Reserve in 1967.

Following his departure from Congress in February 1999, Mr. Livingston established the successful lobbying firm, The Livingston Group, in both Washington, DC and in New Orleans, LA.    His recently published memoir, The Windmill Chaser, received enthusiastic acclaim. He serves as a Member of the Sovereign Military Order of Malta, the Metropolitan Crime Commission, the Advisory Board to the New Orleans branch of The Salvation Army and the Society of the Cincinnati. He lives with his wife, Bonnie, in New Orleans, Louisiana.  They have three sons, a daughter and eight grandchildren