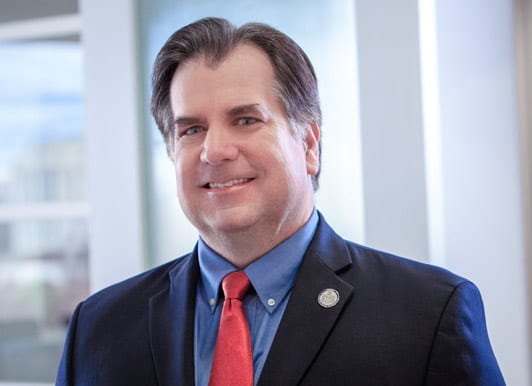 Tim Hugo represents the 40th district in the Virginia House of Delegates. As a past honoree of Washington Business Forward’s Top 40 “rising stars,” he was also recently appointed the Executive Director of the Free File Alliance (FFA). This public-private partnership between a coalition of tax preparation companies and the IRS works to provide free filing for federal income tax return to low and moderate income citizens.

Prior to joining the FFA, Mr. Hugo served as the President of CapNet, a technology association dedicated to educating and electing public officials who recognized the concerns of the technology community. He has also served as the Chief of Staff to Congressman Bud Shuster (R-PA), Chairman of the House Committee on Transportation and Infrastructure. Mr. Hugo worked closely with Chairman Shuster on groundbreaking national transportation legislation (“TEA-21’’).

In 2002, Mr. Hugo was elected to the Virginia House of Delegates with almost 70% of the vote. His current district entails both Fairfax and Prince William Counties. He is currently third in House leadership serving as the Majority Caucus Chairman. He is Vice Chairman of the Finance Committee and also serves on the Commerce and Labor, Transportation, and Privileges and Election committees.

Mr. Hugo has worked closely with the General Assembly to ensure that Virginia has a favorable business climate not only for local businesses, but also for businesses looking to relocate to Virginia. Recently, he worked to secure state funds for the continued operation of the Virginia-Israel Advisory Board (VIAB) so that Virginia remains a business-friendly region for Israel.

Mr. Hugo earned his Bachelor of Arts degree from the College of William and Mary and received a Kodak Fellowship for the Senior Managers in Government Program of the John F. Kennedy School of Government at Harvard University.