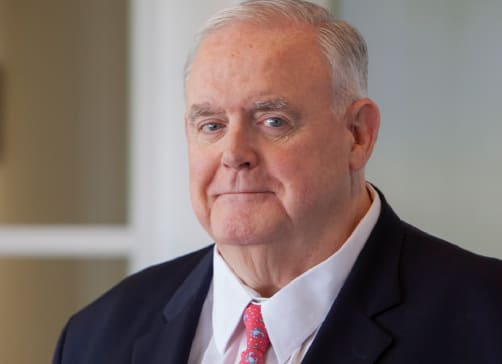 Bernie Robinson joined The Livingston Group (TLG) in 2001 and became a partner in 2008. Prior to joining the firm, from 1999 to 2001, he served in Governor George Ryan’s cabinet as the lead lobbyist for the State of Illinois. He also helped elect and served as the first Chief of Staff to Congressman Jim McGovern (D-MA).

From 1978 to 1984, Mr. Robinson established and led a 50-state US government affairs program for Philip Morris. He was based in Lausanne, Switzerland for Philip Morris International from 1984 to 1990 as a member of the firm’s 13-person management team, overseeing operations in 86 countries, including Scandinavia/Finland, Africa, the Middle East, Turkey, Eastern Europe and the former USSR. For the corporate holding company, he directed Philip Morris’ successful tort reform program in the US from 1990 to 1993.

In 2002, Mr. Robinson helped develop an agreement between the Government of Cuba and the Social Service USA Research Council to preserve Ernest Hemingway’s writings in Cuba. Mr. Robinson has a bachelor’s degree in history from Thomas More College and a Juris Doctorate from the Chase School of Law in his home state of Kentucky.